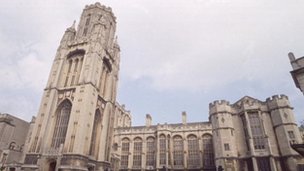 The University of Bristol has fallen eight places to 74th

Leading UK universities are slipping down an international league table.

The table’s authors warned that, beyond elite institutions, UK universities faced a collapse in their global position within a generation.

Of the leading research-intensive UK institutions, Bristol fell eight places to 74th and Sheffield is down nine places to joint 110th.

And the University of Dundee has fallen out of the top 200 into the 201-225 band on the best of the rest list.

However, a few UK institutions have improved their ranking – the London School of Economics has risen from 47th to 39th place, the University of Edinburgh has climbed from 36th to 32nd and the University of York has leapt from joint 121st to 103rd.

The United States dominate the rankings, with seven of the top 10 places and 76 of the top 200.

Huge investment in top research universities across Asia is starting to pay off. And while the Sun rises in the East, England faces a perfect storm – falling public investment in teaching and research, hostile visa conditions discouraging the world’s top academics and students from coming here, and serious uncertainty about where our next generation of scholars will come from, with a policy vacuum surrounding postgraduate study.

Given the seriousness of the funding cuts facing England and the strength of the competition, the tripled student tuition fees introduced this year look increasingly like a sticking plaster for an amputation.

Some Scottish institutions have fallen far, he said.

While there are current policies protecting investment in universities there, they are unlikely to be enough to meet the challenge posed by massive spending in the East. These disappointing results may resurrect the debate about charging tuition fees in Scotland.

Dr Wendy Piatt, director general of the Russell Group of leading universities, said they continue to punch above their weight, with 10 in the top 100.

But she added: If we are serious about staying on top, the government must concentrate investment where it will have the most impact – in our world-class research-intensive universities.

The UK cannot afford to be outmanoeuvred by other countries that clearly recognise that investment in their leading universities is the key to growth.

Universities minister David Willetts said the UK’s system had maintained its world-class status, but warned: We cannot be complacent.