The government has unveiled plans for a fully privatised railway line, with track and trains operated by the same company.

A new line linking Oxford and Cambridge will not be developed by Network Rail, the owner of Britain’s rail infrastructure. Instead, a new entity will be responsible for track and infrastructure, as well as operating train services, under proposals drawn up by the transport secretary, Chris Grayling. 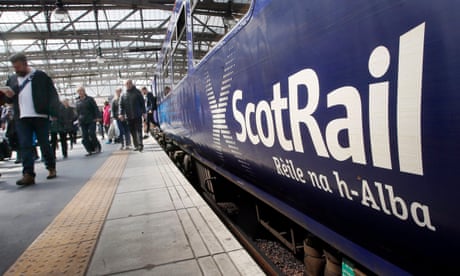 “What we are doing is taking this line out of Network Rail’s control,” Grayling told BBC Radio 4’s Today programme. “Network Rail has got a huge number of projects to deliver at the moment … I want it to happen quicker. This is an essential corridor for this country. On that route we are going to bring in private finance, in a form to be decided.”

In a keynote speech later on Tuesday, Grayling will outline further how the government plans to reunite the operation of tracks and trains, which are currently the respective responsibility of publicly owned Network Rail and private train operating companies (TOCs). He will also outline how future rail franchises will have to create integrated operating teams between TOCs and Network Rail.

The RMT union said Grayling’s rail plans would recreate privatisation chaos that it claims he introduced in the prison system as justice secretary.

On Tuesday morning, Grayling told parliament in a written statement: “I am going to establish East West Rail as a new and separate organisation, to accelerate the permissions needed to reopen the route, and to secure private-sector involvement to design, build and operate the route as an integrated organisation.”

He said he intended to build on two major reports into the rail industry, the 2011 McNulty report and the 2015 Shaw report, that advocated cost-cutting, devolution and bringing in private finance. He added: “But there is much more to do.” While officials at the Department for Transport have disputed reports that Grayling is seeking more immediate challenges to Network Rail, unions pledged to fight the proposed changes.

The RMT general secretary, Mick Cash, said: “This is a politician who doesn’t believe in the public sector, who spent five years at the justice department and left a prison system in chaos and now wants to do the same on the railways. And we are not going to stand idly by and watch that happen.

“This is a slippery slope to privatisation and the breakup of Network Rail and we are deeply concerned about it.”

Rail privatisation has consistently polled as deeply unpopular with supporters of all parties, and privately owned Railtrack’s management of the track and infrastructure from 1994 to 2002 remains associated with fatal train crashes including Potters Bar and Hatfield, in Hertfordshire. 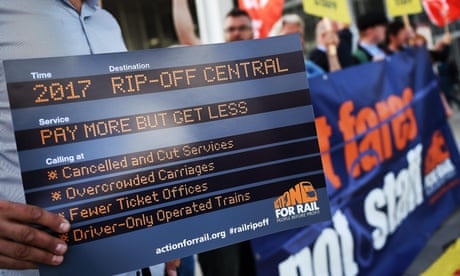 Despite this, Grayling hopes the restored Oxford to Cambridge line, axed following the Beeching cuts in the 1960s, will be the first integrated rail operation in Britain since privatisation in the 1990s. Funding towards restoring the rail link between the cities, on a route that will have a branch to Milton Keynes, and eventually extend to Norwich and Ipswich, was announced in the autumn statement last month.

A new organisation, East West Rail, will be created early in 2017 to secure investment and build the line, eventually becoming a private company that will operate train services.

In the meantime, Grayling will demand that Network Rail and TOCs work more closely together in the interests of passengers, with proposals for more “vertical integration” to be built into the upcoming South Eastern and East Midlands franchises (pdf).

t will mean they run better on a day-to-day basis … Our railway is much better run by one joined-up team of people. They don’t have to work for the same company. They do have to work in the same team.”

A lack of communication and shared incentives between track and train operators has been identified as one factor in the long-running problems at Southern, the commuter network to the south of London, which has been plagued by delays and cancelled services.

In September, Grayling appointed Chris Gibb to run a board with a £20m fund to ensure rail maintenance worked in tandem with Southern’s train operations.

Cash said the government was “dragging the railways back to the failed and lethal Railtrack model”.

“The idea that what Britain’s railways need is more privatisation is ludicrous,” he said. “The introduction of the profit motive into infrastructure raises again the spectre of Hatfield and Potters Bar and the other grotesque failures that led to the creation of Network Rail.”

The general secretary of the train drivers’ union Aslef, Mick Whelan, said: “The failures and tragedies of the Railtrack era remind us that infrastructure should never be run for profit. I’m concerned that in 2016, [Grayling] is seriously considering a return to one of the darkest times in the history of Britain’s railways.”

The idea of alliances between TOCs and Network Rail had been tried recently without success, Whelan said. “What he is proposing is a desperate, half-baked reform that will only add another layer of unnecessary complexity to the rail industry.”